Every magical fact you ever wanted to know about our one-horned horsey friends! We've compiled 30 of the most sparkly unicorn facts for your enjoyment!

Unicorns! They're like horses, but better! We've found the most mythical facts about unicorns and put them into this ultimate awesome list! Find out all about the history of the unicorn, the secret behind its horn, and even real-life unicorns that actually existed! And if you enjoyed this, why not check out more unicorn goodness on our Unicorn Page! Or you could find out what your mystical Unicorn Name Would Be? And if you're feeling confident about your unicorn know-how, test yourself with this Ultimate Unicorn Quiz!

1. The unicorn is the national animal of Scotland

Yes, believe it or not, the unicorn is Scotland's national animal! That means it appears on hearldry, coats of arms and other official stuff. Apparently it was chosen because it was believed to be the natural enemy of a lion - which is England's national symbol! You may even have heard the rhyme about it 'The Lion and the Unicorn', which is said to represent Scotland and England's battles!

Nowadays we (sadly) know that unicorns are probably made up, but hundreds of years ago, people were'nt so sure! In those days there were still LOADS of animals waiting to be discovered, and some people thought the unicorn might be one of them! They appeared in art, folklore and stories all over the world!

3. Ancient peoples had their own versions of unicorns

Lots of different cultures all over the world had their own unicorn myths, including China, Persia (modern Iran), Europe and India. They all varied, but the one thing they had in common was (of course) the single horn on their heads. There's even what seems to be depictions of unicorns in cave paintings!

4. Narwhals and unicorns often got confused

For centuries people have been passing off narwhal horns as unicorn horns. The narwhal is a type of whale, but with a long horn on its head, which it uses to defend itself from predators and other narwhals. It's actually technically a tooth, or tusk! Sometimes their horns would wash up on shore, and people would think they came from unicorns!

Unicorns are usually depicted as white, a colour which symbolises innocence and purity, two qualities the unicorn is known for. They are also meant to be able to tell if you're lying with their magic powers!

The idea of an animal with one horn isn't completely far-fetched; after all, lots of animals have two horns on their heads like deer, moose, antelope and sheep. In fact, the Okapi, an African animal related to giraffes, sometimes grow single horns on their heads if their horns fuse together. They are sometimes called the 'African Unicorn'!

7. Their horns are meant to be magical

Unicorn horns are said to possess special powers, including the power to tell if someone was lying, and to cure certain diseases. That's why people got so excited when they found washed up narwhal horns, and would sell them for loads of money!

8. A unicorn is not a Pegasus

Unicorns can often be confused with winged horses of Greek myths, sometimes known as Pegasus. Although unicorns CAN have wings, they are two separate legends. Pegasus was the mythical winged horse that appears in many different Greek myths, and is also a constellation!

10. The ancient Greeks wrote about unicorns

The Ancient Greeks wrote lots about unicorns, but not as part of their myths and legends. Instead, they believed that unicorns were real and wrote of them like real animals they had studied in the wild. It's pretty likely that the myth came from stories they'd heard about real animals.

Alicorn is also the name for the mysterious magical substance that the horn is made out of. It was thought to be magical, and people used to eat it (or something they thought was alicorn, anyway) Yeuch!

12. Unicorns are famous in films

You might remember the unicorn scene in the first Harry Potter film, where a unicorn's blood is meant to make the drinker invincible. They also use unicorn hair in wands in the Harry Potter universe. A film called 'The Last Unicorn' is all about the only unicorn left, and of course, you must know all about Twilight Sparkle, the flying unicorn from My Little Pony!

Unicorns appear in lots of literature, including Harry Potter, the Narnia series, and lots of fairy and folk tales!

There have been thousands of pictures of unicorns in art, including sculptures, cave drawings, and medieval tapestries. Often, unicorns symbolise purity and innocence, and appear in paintings with young women. One of the most famous depictions are the Unicorn Tapestries, a series of tapestries from the renaissance depicting the hunt for a unicorn.

15. Unicorns are meant to live in the woods

Unicorns are often depicted as living deep in forests and woods, where they can hide from hunters. This might explain why they are so rarely seen!

16. Unicorns show up in the bible

The King James Bible mentions unicorns several times, although many scholars think that this was a mistranslation of the word for 'ox' or another animal. They also think it could might be rereferring to the Re'em, a giant animal from Jewish folklore that Noah tried to rescue during the great flood.

People used to buy all sorts of odd things that they thought might help cure their ailments - including poisons, insects and even powdered dead bodies! Unicorn horns, thought to be magical, were powdered down and consumed by people who hoped it would make them better. Of course, it wasn't unicorn horn, but probably narwhal horn or another animal - if you were lucky! If you were unlucky who knows what it might be that you're eating!

A Tudor explorer called Martin Frobisher found it on the shores of Canada and presented it to the Queen. A unicorn horn would have been a rare and expensive gift, so it probably impressed her a lot! And yes, it was actually a narwhal tusk. You might be spotting a pattern here! It was so treasured it became known as the 'Horn of Windsor' but sadly it was lost during the Civil War.

19. A version of the unicorn found in Chinese folklore is called a 'Qilin'

The Qilin is a mythical Chinese animal that sometimes resembles a unicorn in some ways, although its more of a cross between a horse and a dragon. Like the unicorn, it has magical powers and is considered lucky, and one horn on its head (although more usually two). It's one of many creatures in South East Asian mythology that bears some resemblance to the western unicorn.

20. Unicorns can only be tamed by young women

The Unicorn is meant to be a fearsome creature, and the only way to tame it is to be a gentle young woman! Apparently they are the only ones that unicorns like! Otherwise, you might want to run!

Italian explorer Marco Polo recorded seeing a unicorn on his travels, although it was probably a rhino or other animal instead. Marco Polo also reported lots of other strange things that don't exist, like dog-headed people and giant birds. The Roman emperor Julius Caesar also claims he saw one in a forest when he was trying to conquer western Europe!

It's also celebrated in other parts of the world too! What would you do on National Unicorn Day?

Yes, it may seem hard to believe, but the rather ungainly rhino was once thought to be a unicorn! After all, they both have a single horn on their heads! In fact, the rhino could be the basis for the unicorn myth, especially for westerners who only heard stories of a far away on horned animal.

24. There have been unicorn hoaxes

We'd all love to believe unicorns are real, and some people have even tricked others into believing it! Apart from fake unicorn horns, there have also been instances of showmen passing off other animals as unicorns, or hoax videos of pretend unicorns going viral on the internet. In the 1980s, Ringling Bros. and Barnum & Bailey Circus in the USA tried passing off a goat with a stuck-on horn as a unicorn! It wasn't real...but it did look cute!

25. You can get all sorts of unicorn stuff!

Nowadays unicorns are everywhere! You can buy pretty much anything in unicorn form, including clothes, stationary, cakes and sweets and even costumes for your pets! Cute!

26. The 'Siberian Unicorn' once existed

The Siberian Unicorn, or 'Elasmotherium' was a giant Rhino like animal that roamed the Earth about 30-40, 000 years ago. It was about nine feet tall and weighed four tonnes! And, like the rhino and the unicorn, had a huge horn jutting out of its head! We'd rather bump into a unicorn, thanks!

27. Unicorn cups were a thing

In the middle ages and early modern times, people would often use 'unicorn cups' (often made of the horns of other animals) to drink from because they believed they would protect you against poison. Apparently, if it touched poison, it would explode!

28. Narwhals have been endangered by unicorn myths

Due to their horns being prized as unicorn horns, narwhals have often been in danger from people who want to get their hands on those horns and pass them off as unicorn. Luckily, this doesn't really happen nowadays, though they are under threat from climate change!

29. The unicorn is the strongest of all animals

According to myth, no beast is stronger than the unicorn, so make sure not to upset one if you meet it!

30. The Throne of Denmark is made from unicorn horns 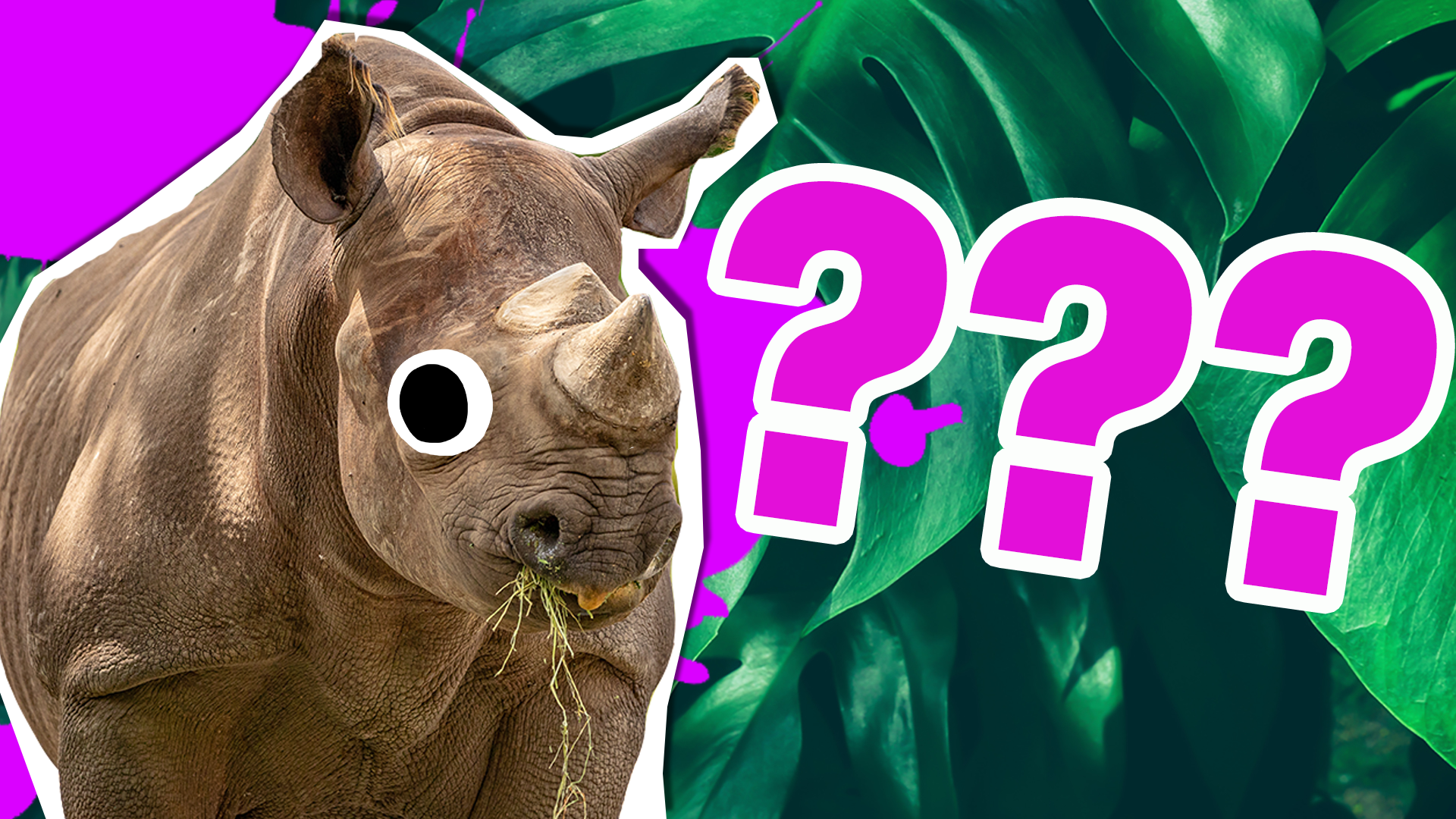