World Book Day on Beano - Create Your Own Story Mashup!

It's Chapter 1 of Beano's Story Mashup! Where will the adventure end? We need you to tell us! 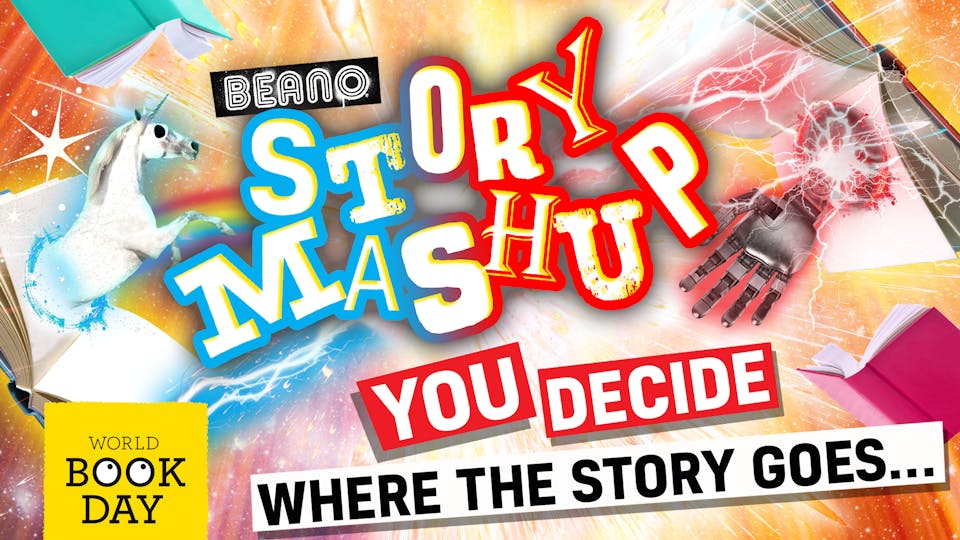 It was a normal day in Book World.

Sherlock Holmes was playing ping pong with a three-headed dog, and Brownbeard the pirate was arguing loudly with a group of beavers about football. A nearby sign read:

Inside a giant hollow walnut, Wizard Quigley was finishing her lunch. She took a swig of pineapple tea and burped politely into the newspaper she was reading, making the pages rustle. She sighed and turned to her housemate, a majestic unicorn called Clovis.

“Well, the news isn’t very imaginative today. What's the point of living in Book World if nothing exciting is happening?”

“Things can’t be new and shiny all the time, Wiz, or having fun might get boring” Clovis replied. He was sometimes a very wise Unicorn. But not today, as even he didn’t believe that. “Hey, let’s go out and see what the others are up to” Clovis continued. “You should probably apologise to Brownbeard for all that stuff you said about his new shoes. He was quite upset”.

“Pfft, fat chance, Clovis” snorted the Wizard as she put on her long black cloak.  The wizard and the unicorn stepped out into the sun, hopping across the little streams of gravy that trickled down from Potato Mountain. They bumped into their old friend Genghis Khan, the 13th Century Mongol ruler. He was playing FIFA.

“Wassup dudes, take a squat!” Yelled Genghis. “I’m just about to annihilate Grimsby Town again, LOL.”  “Hey, Genghis?” asked the Unicorn. “Aren’t you a real person, like, from history? I didn’t think real people were allowed in Book World”. The Mongolian warlord grinned at him. “Bro! You think real life Genghis would be this good at FIFA?”

Genghis and the Unicorn fell about laughing, but the wizard suddenly felt worried. Deep down in her bones, she couldn't help feel that something, somewhere, was about to go wrong... 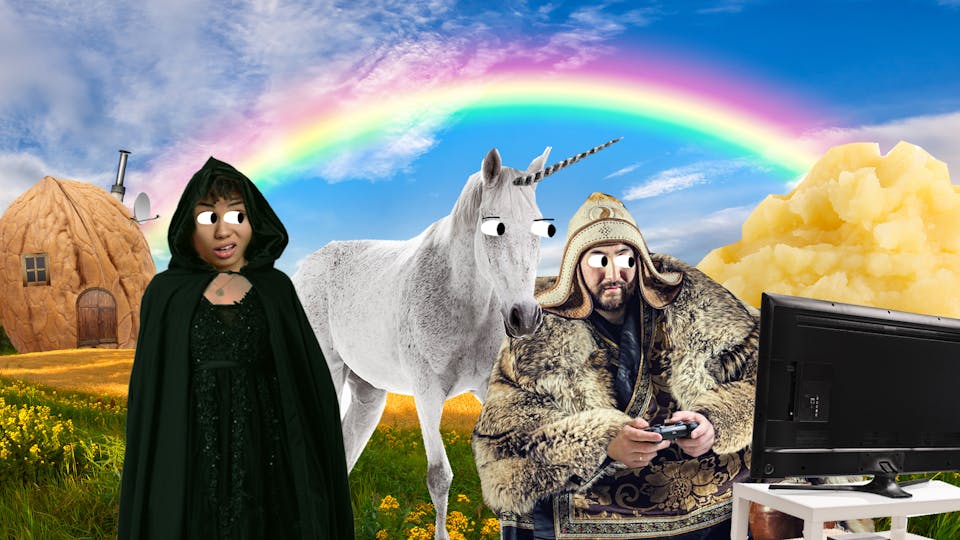 Back in the real world (Ipswich County Library to be exact), Head Librarian Doris Blurb was waking up from a nap.

Yawning, she picked up a book from the floor and stuffed it in the Kids Fiction section. She rubbed her eyes and went back to her work... but Doris had made a HUGE mistake! You see, the book she'd picked up wasn’t Treasure Island - but Dullman’s Extended Computer Science Textbook 2001: 2nd Edition!

Several dimensions down in Book World, this small blunder turned into a biggie. Electric currents surged through layers of long forgotten stories, and with a flash of white smoke, President Logic was born! With his giant computer brain, President Logic looked at Book World and saw that nothing made sense. This made him very annoyed. 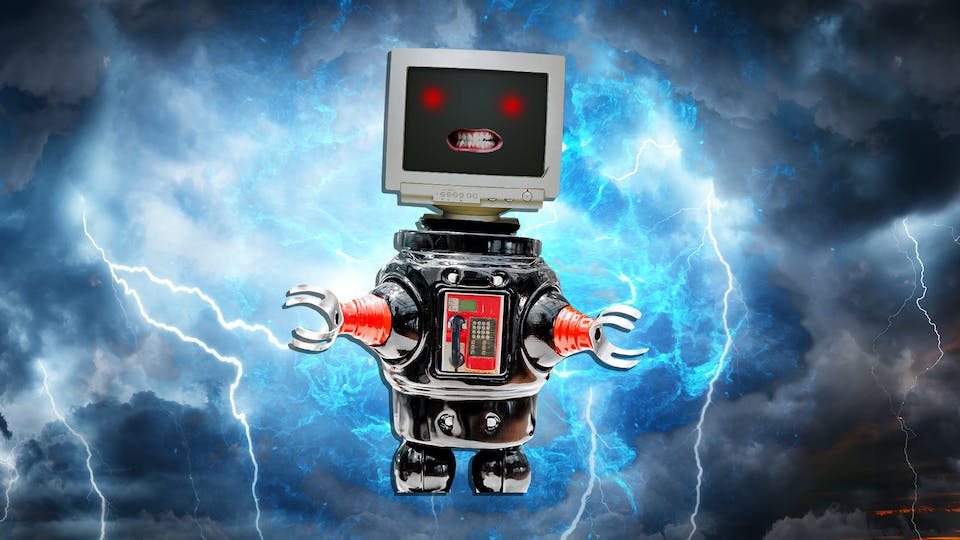 President Logic stomped over to Dickens’ Pond, where some gnomes were sunbathing with Oliver Twist.

With a zap of his logic laser the gnomes turned into garden ornaments, and Oliver Twist was back in his sooty clothes, looking sad.

Everyone in Book World was furious and a meeting was called. “Who does he think he is?” Shouted the talking beavers. “How dare he say I don’t make sense?” blubbed a glowing doughnut with lips.

All the characters agreed that a boring computer textbook had no business telling them what to do. An elf piped up from the back, “Wizard Quigley, you’re the most powerful magician around, you must be able to help us”.

“Come on, Wiz!” huffed Clovis. “Let’s go save the day! You can use your power of invisibility”.

The Wizard thought about it for a moment. She knew she should, and she’d been worrying about it a lot. But she also knew she’d need to go invisible, which always made her feel itchy for a few days afterwards.

“Great! Thanks for volunteering, Wiz! We knew we could rely on you!” shouted Genghis Khan, knowing full well that the Wizard hadn’t actually agreed yet.

“You can take my magic Playstation Controller of Ultimate Power, too!” 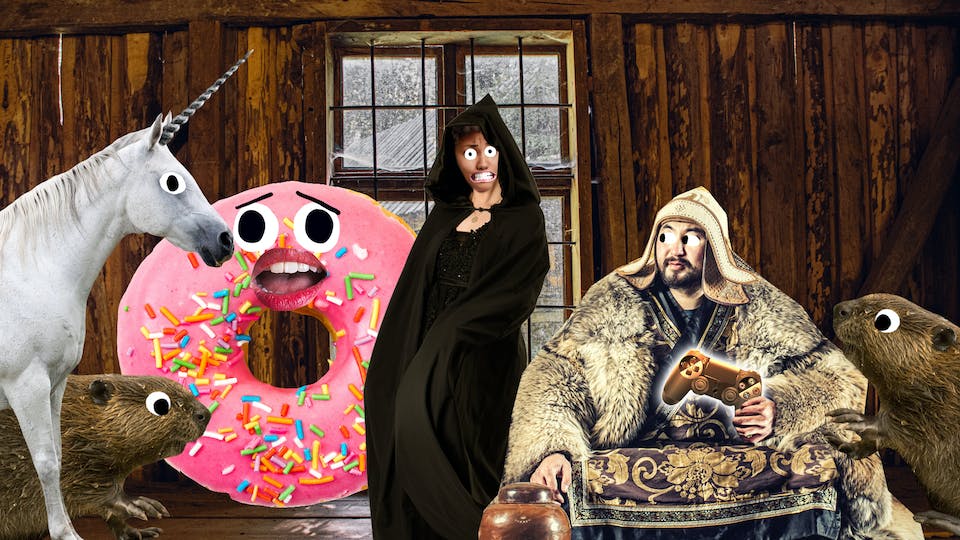 Wizard Quigley had no choice. She took the Playstation Controller of Ultimate Power and set off to Dickens’ Pond with Clovis.

When they got there the Wizard made herself invisible and went ahead to investigate, whilst Clovis hid in a bush. She hoped she wouldn’t have to stay invisible for long, because it made her really itchy.

But she soon found President Logic hassling a family of badgers, demanding to see their badger licences. When they replied that there’s no such thing as a badger licence, the President got very angry.

And with another fearsome zap, the badgers couldn’t speak any more. The Wizard was horrified and hurried back to Clovis. 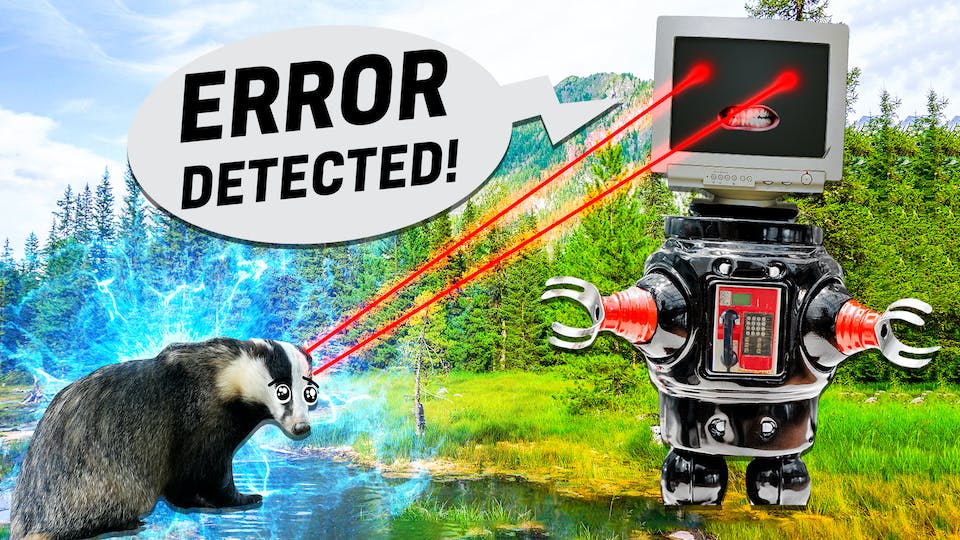 Wizard Quigley turned visible again and whispered: “Ok Clovis, this robot monster thing is a real meanie. Here’s the plan - we go up to it and tell it to leave Book World. If it doesn’t we’ll use the Playstation Controller of Ultimate Power to send him back to whatever boring place it came from”.

The two of them trotted up to the giant robot and whistled. Slowly, it turned to face them.

“Oi, mate!” Shouted the Wizard. “This is Book World, it’s for fictional characters and we’re quite happy living in walnuts and playing ping-pong and not making much sense. You’re obviously from some sort of science-y non-fiction book, so you don’t belong here. You’re not welcome and you should go away”

President Logic looked a bit sad at this, but snapped out of it and replied “Live in walnuts? Walnuts are too small.... ERROR DETECTED!”

The wizard pulled out the Playstation controller and mashed the buttons. But nothing happened!

“Gah! Genghis Khan’s used all the batteries up! Why don’t they just have a wire like they used to?”

That's the end of today's chapter! What should happen next? We need YOU to decide!

What should Wizard Quigley do now? 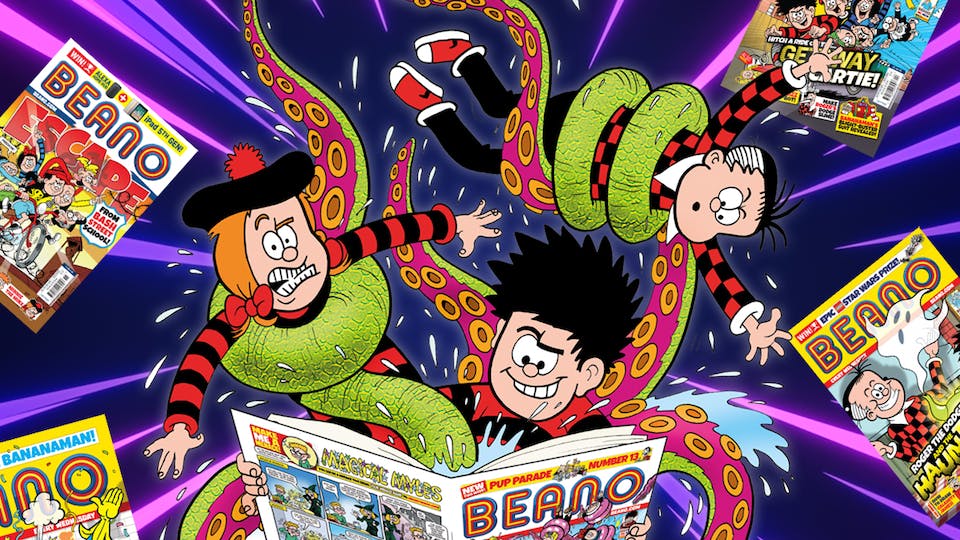