26 Corny Jokes Which Will Make You Groan

Looking for the ultimate list of ludicrously corny jokes? Look no further! Beano's collection will have you rolling your eyes in no time.

Don't leave corny jokes to Dads, get cheesy with some of these groan-worthy funnies!

Need more? Click here for our Dad jokes, love jokes or even some knock knock jokes...

Keep it random with our joke generator!

What does a house wear?

What's cooler than a talking dog?

What's the best time to see your dentist?

It doesn't matter if you're super kind,

What kind of ghost has the best hearing?

Why shouldn't you write with a broken pencil?

How do billboards communicate?

Why is corn such a good listener?

Because it's all ears!

What do you call an unpredictable camera?

How did the barber win the race?

He knew a short cut!

What are bears without bees?

How does a squid go into battle?

What do you call a shoe that's made out of banana?

I wouldn’t buy anything with velcro...

It’s a total rip off!

I keep trying to lose weight…

…but it keeps finding me!

Which pet is the loudest?

Where do you learn to make ice cream?

Is this pool safe for diving?

They're always up to something!

What do squirrels give each other on Valentine's Day?

What did one light bulb say to the other light bulb on Valentine’s Day?

I love you watts and watts!

What did the caveman give his Valentine?

What did one pig say to the other on Valentine's Day?

What did the policeman say to his tummy?

You're under a vest!

When's a door not a door?

Take a shot at our joke generator! 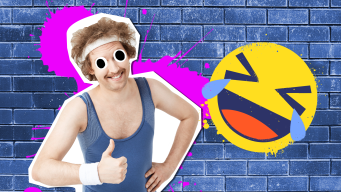