Your ultimate guide to episodes 21 to 26 of your favourite show!

In this episode, Dennis and the gang are excited about a brand new gangster film, but get caught up in a crime story of their own!

When the gang gets picked up by a mysterious limousine, they find out that Dennis has been mistaken for somebody called ‘Mr Big’, a real-life jewel thief.

Can Dennis save the day and talk his way out of his own gangster film? 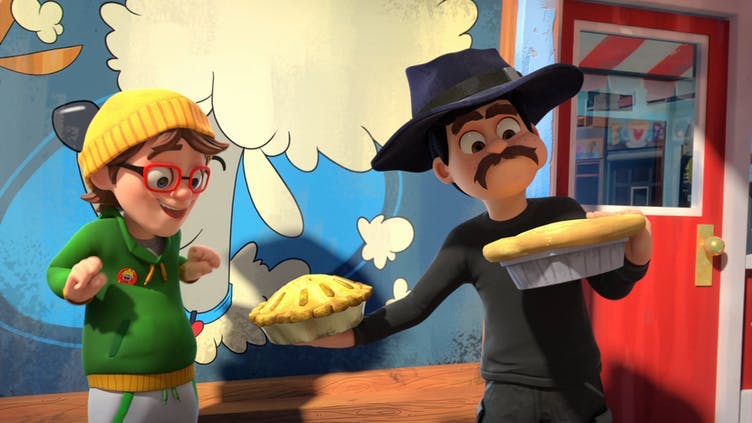 Episode 22: Red and Black to the Future

After messing about in Professor Von Screwtop's lab, Dennis discovers he's been missing for two weeks and missed the Dinmaker's biggest gig!

Dennis, determined not to miss the gig, returns to the lab to try and go back in time – but can he survive the journey, avoid the past version of himself, and make it to rehearsal in time? 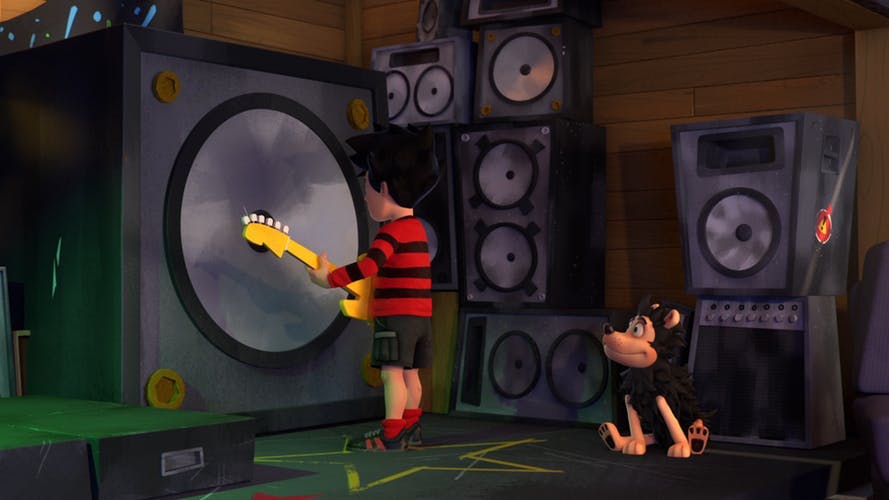 With the gang showing off tricks at the Beanotown skatepark, Gnasher decides to join in. One crash later, and Dennis’s best pal finds himself stuck in a cone of shame! Now Gnasher can’t bark or bite or barely be a dog!

Gnasher's cone makes it impossible for him to sneak into school, so Dennis' pig Rasher takes his place.

The gang gets into trouble at school, and Walter tries to capture the pig. Will the gang be able to find kidnapped Rasher and runaway Gnasher before it’s too late? 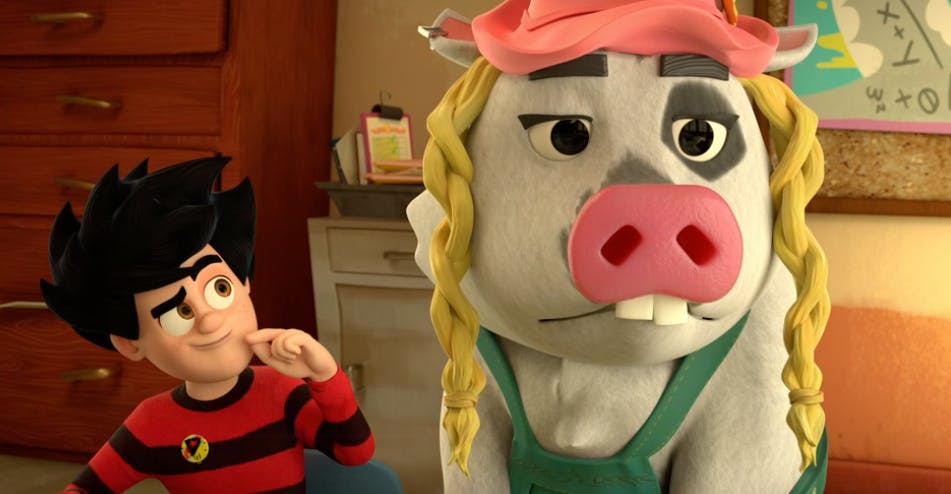 When Dennis and Gnasher take control of the Beanotown ball pool, Walter and Clawdia decide to take revenge.

With a stolen tooth from our favourite Tripehound, Gnasher, things start to go wrong for Dennis and the gang. Clawdia secretly slashes JJ's tires with the tooth, and tricks Gnasher into wrecking the den – even Screwtop's machines point to Gnasher as the culprit!

Can Dennis and the gang prove Gnasher's innocence? 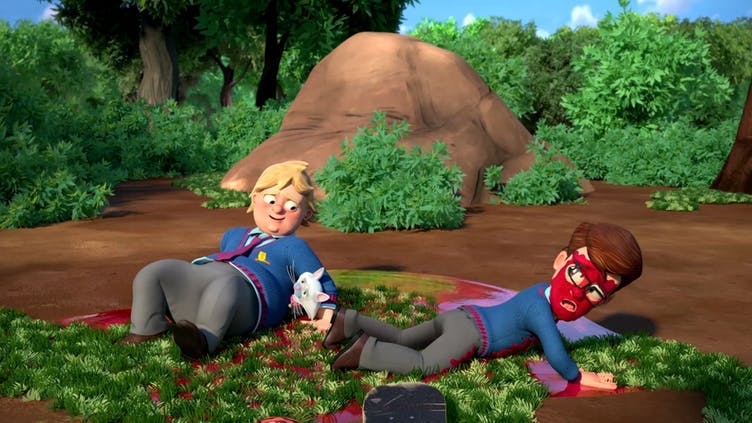 Episode 25: Postcards from the Veg

Pieface thinks Paul isn't looking so good – so Dennis takes him on a potato holiday. With his camera and some costumes, Dennis sends postcards to Pieface from Paul's visit to a sunny beach.

Disaster strikes when Paul goes missing for real! Can Dennis rescue Paul from being kidnapped, and bring him safely back to Pieface? 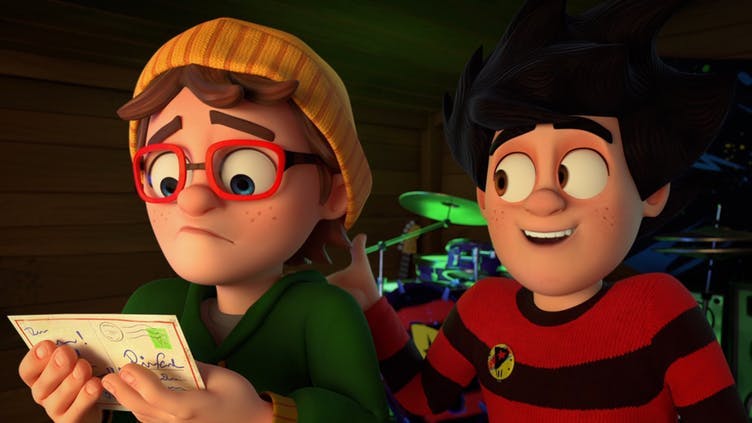 In this episode, Walter tricks Gnasher into a biting a tough and expensive titanium sausage – it's so tough, that all of Gnasher's teeth fall out!

Dennis and JJ butt heads over how to make Gnasher feel better – do they wait for his teeth to grow back, or do they take revenge on Walter? 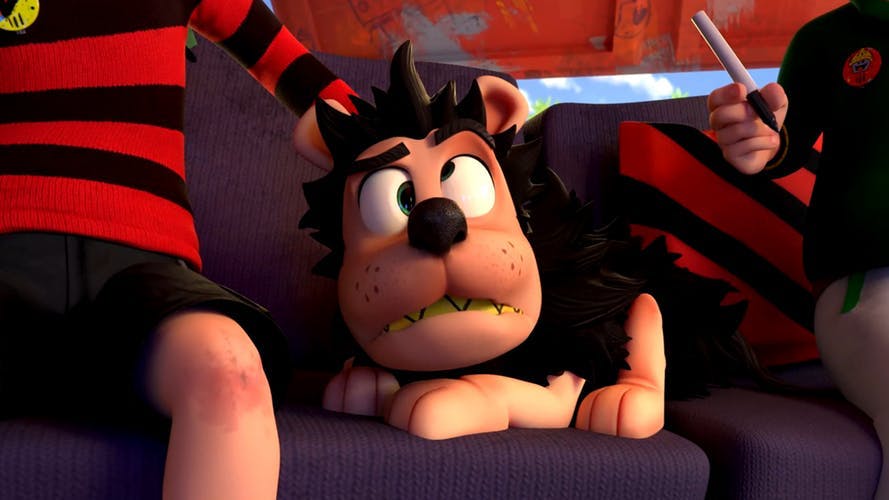 Sneak Peek: Dennis & Gnasher Unleashed!
Learn How to Skate: Pop Shuvit
How to Draw Dennis
Dennis & Gnasher Unleashed! Trailer
Watch Gnasher's Best Bits
Guess the Dennis and Gnasher TV Quiz
Watch Dennis Commit the Ultimate Prank!
Walter Takes On Dennis At Footie!
Who Does Dennis Bump Into On Holiday?
It's School Portrait Day!
What Happens When Dennis Grows Cress?
See The Greatest Race In History!
Watch Dennis Read the News!
Who'll Be the Pie King of Beanotown?
Watch Dennis Become Walter's Butler!
Why is Gnasher Biting a Dinosaur Leg?
Has Dennis Cursed Beanotown?
See Walter Use a Book to Prank Dennis!
Why Does Dennis Have a Moustache?
Are Dennis And Gnasher In Trouble?
Walter The... Menace? What?
Who Are These Pensioners?
Bona Fide Genius
Have You Seen Gnasher's Fleas?
The Show Mustn't Go On
Picture Prefect
See the Gang Cause Mayhem at the Prom!
What Prank Will Dennis Pull Next?
See Dennis In a School Sports Showdown!
Who Will Look After Gnipper?
How Did a Tank End Up in the Lake?
Look at this Amazing Waterslide!
Watch Dennis' Gran Skate with Style!
How Will Dennis Get His Stuff Back?
Why Has An Ape Joined Dennis's Band?
Why is Dennis So Keen To Go To School?
Who is The Gnashinator?
Watch Dennis's Most Mischievous Moments
Episode 50: Call of the Wild
Episode Episode 49: Get Lost
Episode 48: Double Crust
Episode 46: Pieface Day
Episode 44: Pi in the Sky
Episode 45: BMXcess
Episode 47: Crouching Dennis Hidden Yeti